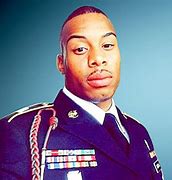 Staff Sergeant Kyle Wayne LeFlore was born and raised in Omaha and grew up in a house on North 29th Street between Meredith Avenue and Fowler Avenue. He attended Northwest High School where he was a two-time state tournament wrestler. Kyle joined the United States Army in 2007 at the age of 17, serving on active duty for over nine years. He completed tours in Afghanistan, Kuwait, Iraq, and Korea.

Kyle took pride in helping others and making his community a better place. While on military leave, he would often volunteer as a youth tutor and organize efforts to clean up trash in his neighborhood and surrounding community. He was also an avid boxer and martial artist and boxed for the All-Army team in Fort Riley, Kansas. Kyle was tragically murdered in Omaha while visiting family over the holiday before taking a promotional position in Arizona. This commemorative designation would honor Kyle on 29th Street from Meredith Avenue to Fowler Avenue.