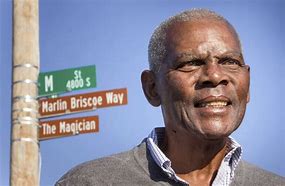 Marlin Briscoe, nicknamed “the Magician”, was an American professional football player who was a quarterback and wide receiver in the American Football League (AFL) and National Football League (NFL). In October 1968, after being drafted by the AFL’s Denver Broncos, he became the first black starting quarterback in professional football and established a Denver rookie record of 14 touchdown passes that season. He played professionally for nine years. Briscoe was born in Oakland, California, on September 10, 1945. He relocated to Omaha, Nebraska, with his mother when he was five years old after his parents divorced. He attended Omaha South High School, where he starred in several sports and played at running back for a football team that won the state championship.

Briscoe was 5 ft 10 in (1.78 m) and 177 pounds (80 kg) when the AFL’s Denver Broncos took him in the fourteenth round of the 1968 draft at age 22. The Broncos intended to convert him to cornerback, but Briscoe had negotiated for a chance to compete for the quarterback position.

On September 29, 1968, starter Steve Tensi suffered a broken collarbone, and backup Joe DiVito was spotty. Head coach Lou Saban summoned Briscoe from the sidelines in the fourth quarter against the Boston Patriots to give him a try. Briscoe’s first play was a 22-yard completion. On his second series he orchestrated an 80-yard touchdown drive. He completed a 21-yard pass and ran for 38 more himself, carrying it the last 12 yards for the score.

A week later, on October 6, Briscoe became the starting African American quarterback in the AFL. He threw 14 touchdown passes that year in just five starts, including four on November 24 against Buffalo; both are still Broncos rookie records. He also threw for 335 yards in that game, a rookie record that stood until John Elway broke it in 1983, and one of only three 300+ yard rookie games in franchise history. He completed 41.5 percent of his passes and averaged 7.1 yards per attempt and his 17.1 yards per completion led the American Football League (and ranks 18th all-time). He also ran for 308 yards and three touchdowns.

Before the 1969 season started, Briscoe, still determined to play quarterback, discovered that head coach Saban intended to use Pete Liske as the starter, so he asked to be released. He went to the AFL’s Buffalo Bills where he was turned into a receiver, since the Bills already had superstar Jack Kemp, former Pro Bowler Tom Flores, and James Harris, another black quarterback with a more prototypical 6-foot-4 and 210-pound frame. Briscoe led Buffalo in touchdown catches in each of his three seasons there and in receptions twice. In 1970, he was in the top two in receptions and receiving yards and became an All-Pro.

Omaha native Marlin Briscoe was the first African-American to start at quarterback in the National Football League in 1968 with the Denver Broncos. Mr. Briscoe is a proud winner of two Super Bowl rings, earned while playing with the Miami Dolphins and was selected to the Pro Bowl as a wide receiver with the Buffalo Bills. As a young man, Marlin grew up in the housing projects in South Omaha amid the familiar packing houses and meat processing plants. Mr. Briscoe excelled in several sports while attending Omaha South High School. His accomplishments earned him a scholarship to Omaha University, now known as the University of Nebraska at Omaha. He played quarterback on the football team and was later named All-American for small colleges. It was at this time that he earned the nickname “Marlin the Magician.”