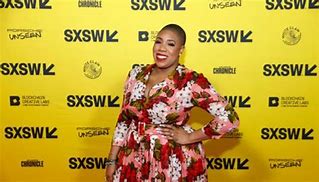 Sanders was raised in North Omaha, Nebraska. Her father, Daniel Sanders, is retired from the U.S. Army Corps of Engineers. Her mother, Terri Sanders, is the former publisher of the Omaha Star and former executive director for the Great Plains Black History Museum.

She attended Sacred Heart Catholic School. As a child, Sanders wanted to grow up to host her own television show. She used to walk around the house acting as Donna Burns, an imaginary television host. Her first job was working at Time Out Foods in Omaha, a Black-owned restaurant. She graduated from Mercy High School.

Sanders attended Creighton University and earned a bachelor’s degree in business administration. While in college, she interned at a law firm, where she realized she didn’t want to work in law.

Sanders worked in the communications department of former Omaha Mayor Jim Suttle and was deputy communications director for Democratic gubernatorial candidate Chuck Hassebrook in 2014. Sanders joined the Bernie Sanders 2016 presidential campaign in August 2015 as the national press secretary. In December, Fusion listed Sanders as one of 30 women under 30 who would shape the 2016 election.

In June 2016, she quit the Sanders campaign. She joined CNN as an analyst and commentator later that year. That same year, Sanders was recognized as one of 16 Young Americans Shaping the 2016 Election by Rolling Stone magazine.

She joined the presidential campaign of former vice president Joe Biden. In 2020, she published a memoir, No, You Shut Up. On November 29, 2020, Sanders was named chief spokesperson and a senior advisor for Vice President Kamala Harris.

On December 1, 2021, Symone Sanders announced her departure from her role as chief spokesperson for the Vice President of the United States. Shortly after. MSNBC announced she would host a weekend program for the network, as well as a program on Peacock’s The Choice. The new MSNBC program, Symone, premiered on May 7, 2022.

M. Symone Sanders is an American political strategist and commentator. She is from Omaha, Nebraska and grew up on 22nd Street. During the presidential campaign in 2016, Ms. Sanders served as national press secretary for strategist and political commentator for CNN starting in October, 2016. Sanders also worked for Joe Biden during the 2020 presidential campaign and was later named chief spokesperson and senior advisor for Vice President Kamala Harris. This commemorative designation would honor Symone on 22nd Street from Sprague Street to Sahler Street.